Members of the Cambridge Fire Department Dive Team needed only a minute to rescue a diamond engagement ring and gold wedding band from a watery doom at the bottom of the Charles River near Boston.

Lynn Andrews had removed her cherished rings while enjoying a Fourth of July weekend outing on board their friend's boat, Rebecca Rose, docked at the Charlesgate Yacht Club. She didn't want to get sunscreen on her rings, so she tucked them in the pocket of her husband's shirt.

"We're going about our day and it was awfully hot out there, and [Ninos] decides to take his shirt off to go for a swim. And as he took his shirt off, the rings went flying out of his pocket," Andrews told local ABC TV affiliate WCVB.

Lynn Andrews “was obviously quite distraught,” the fire department noted on its Facebook page. She told cbsnews.com that she didn't think she would ever see the rings again.

Ninos Andrews was confident that everything would be alright.

The couple contacted the Cambridge Fire Department Dive Team, which happened to be patrolling the river on Sunday, July 3. Lynn and Ninos described exactly where the rings had entered the water and firefighter Jeremy Marrache was able use those coordinates to quickly locate the precious heirlooms. 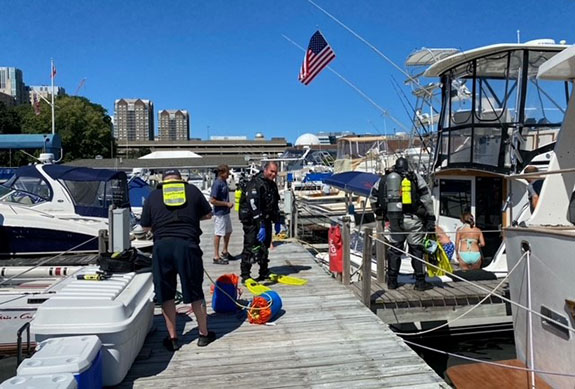 "Things in the river are usually pretty hard to find, so didn't really have a lot of confidence in finding it," Marrache told cbsnews.com. "But we figured we would at least give it a shot."

By a stroke of good luck, the engagement ring had settled onto the silty bottom on its side. When Marrache shined his flashlight at the bottom, the light reflected brilliantly off the diamond about 12 feet below the surface.

"Truly within a minute, Jeremy comes up with it, screams 'I've got it! I've got it!' and blew me a kiss, and I blew him a kiss," Lynn Andrews said.

“This is an amazing example of using our training for public service and a terrific opportunity for the dive team and marine unit members to practice working together,” fire Lt. Stephen Capuccio said in a statement posted to the Cambridge Fire Department's Facebook page.