Researchers from ETH Zurich have developed a new transparent gold nanocoating — about 12 times thinner than gold leaf — that harnesses sunlight to heat the lenses, thereby preventing moisture in the air from condensing on them.

The scientists explained that half of the energy contained in sunlight resides in the infrared spectrum, the other half in the visible light and UV radiation spectrum.

“Our coating absorbs a large proportion of the infrared radiation, which causes it to heat up – by up to 8 degrees Celsius,” explained ETH doctoral student Iwan Hächler, who was a driving force behind the development. The coating absorbs only a minor fraction of the radiation in the visible range, which is the reason why the coating is transparent. 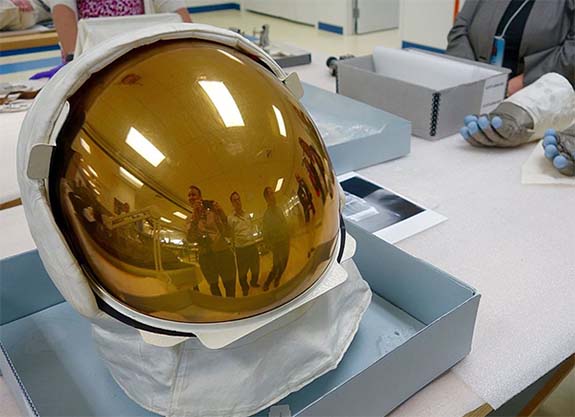 When astronaut Neil Armstrong stepped onto the lunar surface in July of 1969 and proclaimed, “That’s one small step for man, one giant leap for mankind,” his eyes were protected by a visor plated with an ultra-thin layer of gold.

Both he and fellow moon walker Buzz Aldrin were outfitted with what NASA called a Lunar Extravehicular Visor Assembly, or LEVA for short. Gold does an excellent job of reflecting infrared light while letting in visible light, so NASA scientists coated the visors with a gold layer so thin — 0.000002 inches — that astronauts could see through it.

The researchers emphasized that although gold is expensive, the coating requires so little precious metal that the manufacturing costs remain low.

The team is also trying to determine if the anti-fogging method may be used to enhance other objects that need to be heated and defogged, such as windows, mirrors or optical sensors.